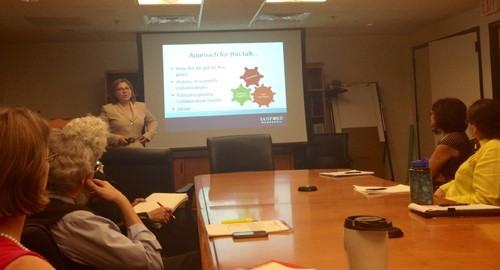 NIMHD welcomed Clinical Psychologist Dr. Amy Elliott last month to present a line of research to build American Indian health studies through transdisciplinary collaboration. Elliott explained the evolution of the Collaborative Research Center for American Indian Health (CRCAIH) program, an NIMHD-funded research grant, and how it helps tribal communities and health researchers collaborate on studies that focus on improving the social determinants of health of AIs in South Dakota, North Dakota, and Minnesota.

“There are three components that drive our work,” said Elliott. This is the main take away I want you to have from this presentation. We work to marry three components in all projects: good science, community engagement, and constant respect for tribal sovereignty.”

Dr. Elliott’s work began in the Northern Plains with the Safe Passage Study, a research grant funded by NICHD. The large prospective study intended to investigate the relationship between prenatal alcohol exposure and adverse outcomes, such as stillbirth and Sudden Infant Death Syndrome. The foundation for this work began in the early 90’s with the Aberdeen Area Infant Mortality Study, which was driven by a tribal request to investigate why the American Indian/Alaska Native (AI/AN) infant mortality rate was so much higher than other races in the same region. Unfortunately, this higher infant mortality rate persists today.

“Studies like the Aberdeen Area Infant Mortality Study and subsequently the Safe Passage Study planted the seeds for tribally-driven collaborative research,” Elliott said. “These studies included many discussions on relating the latest scientific knowledge with the questions that are most relevant in the involved tribal communities. These included many tough discussions involving data sharing, genetics studies, tissue collection to name just a few topics.”

Poverty, low levels of education, low socio-economic status, crime, and greater exposure to environmental hazards all contribute to the health crisis of the AI/AN population. In addition, there are regional health differences between American Indian populations. All CRCAIH projects embrace a “social determinants of health” theme leading to the improvement of American Indian health.

As part of the grant, CRCAIH is required to conduct three innovative research projects that are likely to yield helpful information and result in sustainable health improvements. These three projects are currently being conducted: “Emergency Department Use and Care in American Indian Children,” “Culturally Targeted Education on Living Kidney Donation,” and “Factors Influencing Pediatric Asthma.” CRCAIH also offers pilot grants and other resources and training in the areas of research culture and bioethics, regulation, and methodology.

Click here for more information on the PASS Network.