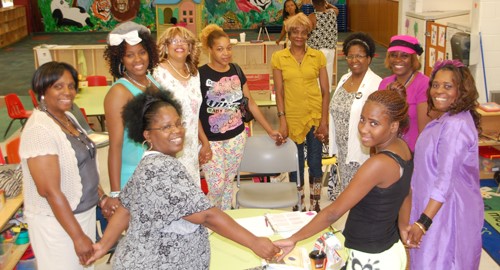 Chronic poverty and low socioeconomic status are associated with disparities in a child's mental and behavioral health, intellectual growth and development, and educational achievement, particularly among racial and ethnic minority populations, according to two reports of the U.S. Surgeon General on mental health. A strong parent-child relationship can have a positive impact on a child’s mental and behavioral development. Most parenting education curricula used by African American families are developed without their input, so the Satcher Health Leadership Institute (SHLI) at Morehouse School of Medicine sought to change that.

SHLI's Community Health Policy Leadership Program (CHPLP) is a unique training program supported in part by an NIMHD Exploratory Center of Excellence (P20) grant that provides members of disadvantaged communities the knowledge, experiences and skills needed to promote and implement policies and practices at the community level that reduce health disparities and advance health equity.

Smart and Secure Children (SSC), is a highly successful CHPLP parent leadership program, developed through a community-based participatory process in partnership with local communities in Atlanta, Montgomery, Ala., Memphis, Tenn., St. Louis, Missouri, Hattiesburg, Miss., and Houston, Texas. SSC is a peer facilitated, parenting curriculum designed to empower parents (including birth, foster and adopted parents; as well as relatives, grandparents and friends who are caregivers) to reduce early childhood disparities in mental health and educational attainment at home and in their communities. The curriculum aims to improve parent-child interactions and experiences; increase awareness and understanding of child development, particularly brain development; and improve leaderships skills in applying quality parenting into daily routines and training peers on the positive impact of quality parenting on a child’s mental and physical health.

"We have had such amazing outcomes,” said Yvonne Kirkland, an SSC Administrator and Inaugural SSC Parent Mentor. “Because of the SSC training, parents now take ownership of parenting and continue to share the good news to anyone who will stop, listen, and receive."

A mother in the Parent Leader group in Hattiesburg was motivated to petition the local Head Start association to increase the nutritional value of their meals as well as physical activity periods for the children, citing data and information from the SSC curriculum.

One graduate of the Atlanta program used the knowledge and skills she acquired to launch a nonprofit program to create sustainable improvements in playground and childcare facilities (a summer camp and after-school tutoring) at the subsidized housing complex where she lives. She was so successful in that effort that a local government agency enlisted her to expand her approach to other housing projects in the region. She also was motivated to expand her leadership abilities by showing parents and grandparents how to enhance their parenting skills. In August 2013, she was recognized for her community service by receiving an “Outstanding Georgia Citizen Award.”

The transformation of one father after participating in the program prompted him to “pay it forward” less than one month after facilitating his SSC parent peer training in Memphis. He teaches SSC sessions twice a week at his church in the impoverished suburban community of Northhaven, which is sorely in need of community champions to create hope for families.

In the SSC program there are three parent leadership levels:

SSC is only delivered by parents in community settings or natural gathering places, such as the Salvation Army, United Way, Early Childcare Center at Atlanta Technical College, barber shops and churches. This enables the parent leadership team to continue transforming their community using SSC parent-led conversational learning experiences rather than a traditional professional-led, lecture approach.

Study participants are recruited through early learning care and childcare providers, food pantries, libraries, nonprofits, and governmental and faith-based organizations that distribute fliers and refer parents to the study. During a 15-week program, parent leaders first undergo one week of training, deliver the curriculum intervention over 12 weeks to parent peer-learners, and provide an additional two weeks of follow-up to parent peer-learners to see them through completion of the program.

The 10-module curriculum covers topics on brain development, social and emotional health, parents’ self-care and nurturing, and positive discipline and is based on culturally-centered values of communalism, spirituality and leadership. Initially targeting African Americans, the curriculum has been adapted for other racial and ethnic minority populations that share similar values.

After participating in the program, parents have emerged as leaders in their households and communities and they reported tremendous growth in knowledge of what they can do to better promote their child’s brain development and social emotional health, as well as having decreased symptoms of depression and other mental illnesses.

"Smart and Secure Children is now one of the catalysts for hope in Northhaven,”said Clintonia Simmons, president and CEO of Healthy Kids & Teens Inc. and SSC community partner in Memphis. “It is not the 12 weeks of training that provide the mesmerizing change. It is the content of the information that is presented, and the mechanism of how it is presented. Parents’ eyes are opened to the ability and power they have to enhance their own lives and the lives of their children. Smart and Secure Children awakens the spirit within us to create smart, safe and secure children."