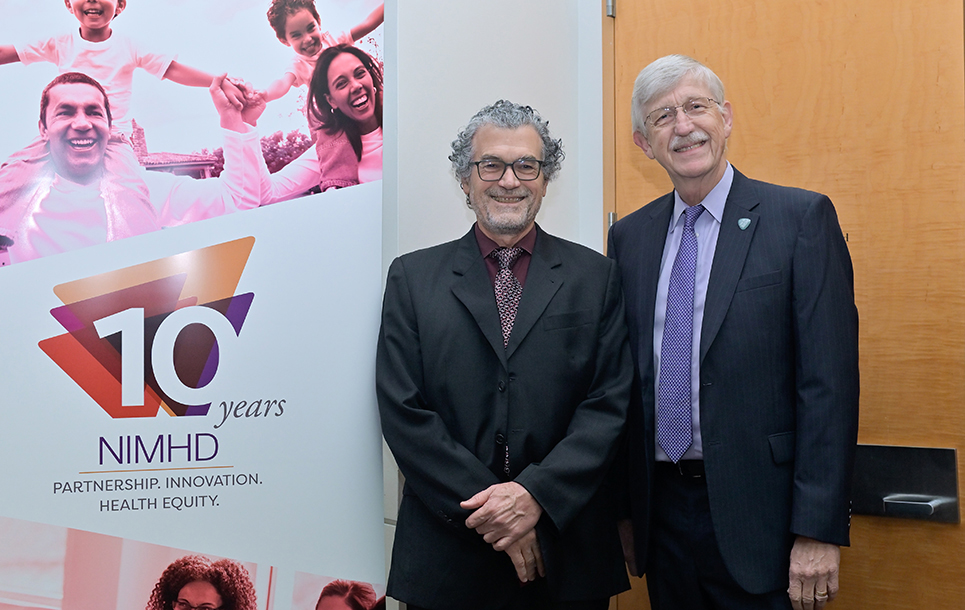 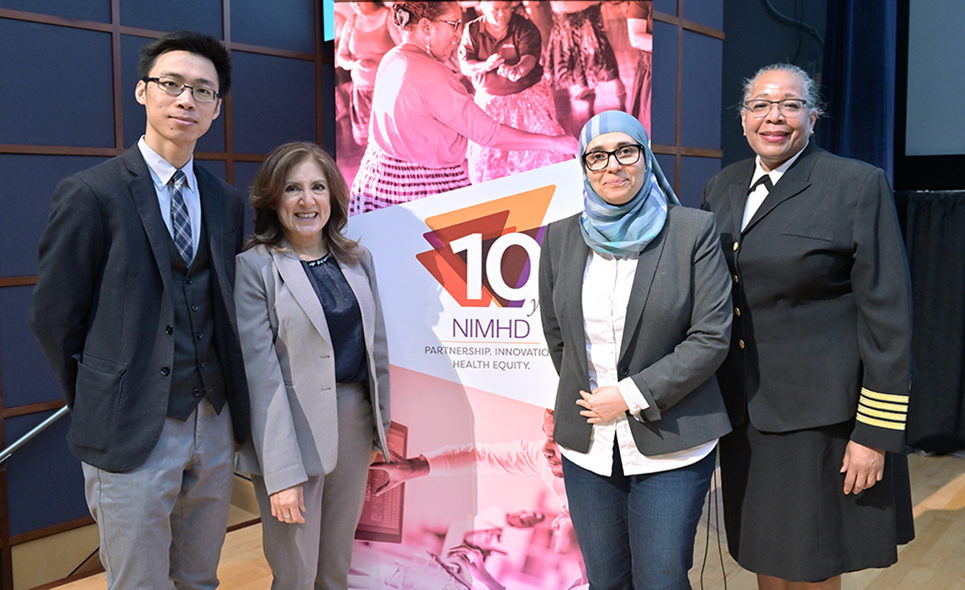 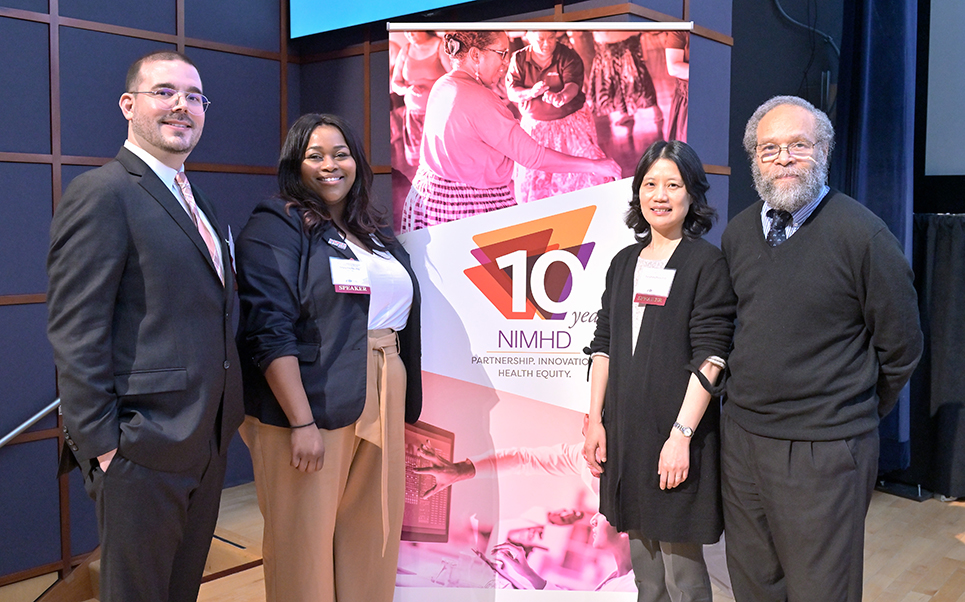 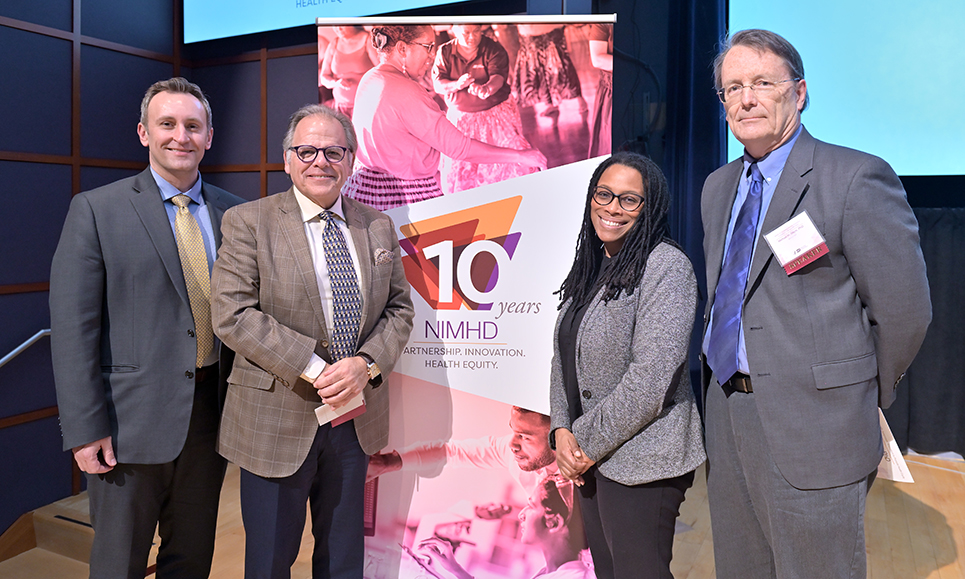 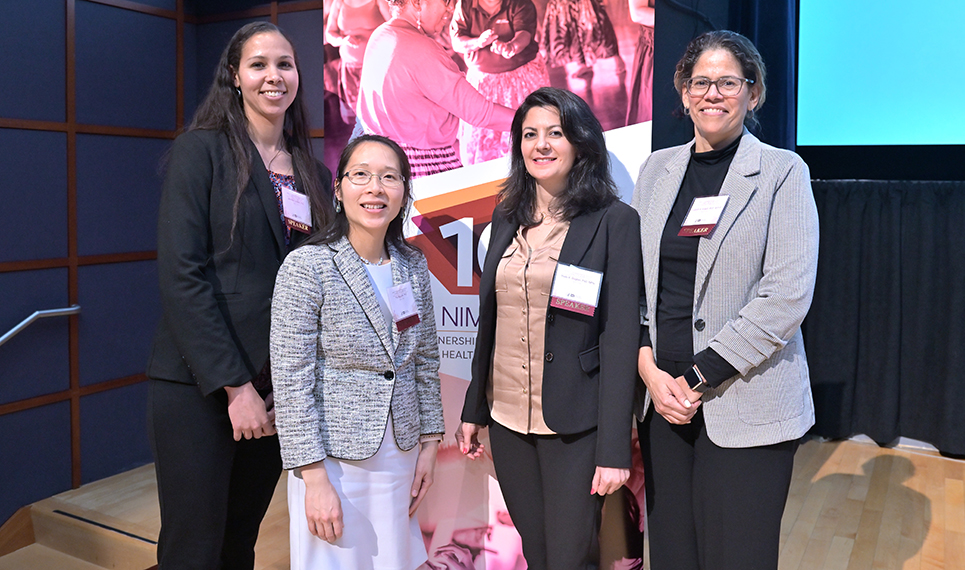 "It's hard to believe, but I've been the NIH Director for almost 11 years," said NIH Director Dr. Collins. "I've watched the way in which the National Institute on Minority Health and Health Disparities enterprise has evolved from a Center to an Institute."

Dr. Collins was speaking at the NIMHD 10th Anniversary Scientific Symposium: Innovations to Promote Health Equity, one of several events celebrating 10 years of NIMHD as an NIH Institute. In addition to a roomful of attendees at the Natcher Conference Center, more than 2,000 people tuned in live on March 3, 2020 through the videocast.

As NIMHD Director Dr. Eliseo J. Pérez-Stable noted in his keynote, it has only been 35 years since the seminal Heckler Report documented the existence of health disparities among racial and ethnic minorities in the United States. Shortly after, in 1990, the Office of Minority Programs, a predecessor to the NIMHD, was created.

What do you do as a new NIH Office tasked with a monumental challenge: moving from a reality where your race or ethnicity impacts how long you live towards one where health equity reigns?

You need lots of talented researchers to study and understand the problem, and to innovate. But you also want that workforce to represent the country and the communities that the NIH seeks to serve.

Through its Research Centers in Minority Institutions (RCMIs), Loan Repayment Program, Centers of Excellence, Community-based Participatory Research Program, and other innovative scientific efforts, the NIMHD has made major inroads towards these goals.

For example, R01 grants are the gold-standard NIH grant mechanism that enables investigators to set up and sustain their own research teams. Dr. Pérez-Stable highlighted that NIH-wide, 1.3% of R01 grant recipients in 2019 were African American. For NIMHD, that number was 13.6%. And the percentage of Latina or Latino awardees of an R01 grant from NIMHD was about double the number for NIH overall.

"One of the conclusions I can draw from this is that if we had the ability to fund more investigators, there would be more diversity in the workforce, right?" Dr. Perez-Stable said, while recognizing that much work remains to be done.

Understanding the health disparities around us

One researcher attracted to the field of health disparities in those early days was Dr. Michele Evans. In 1992, she moved to Baltimore as an intramural researcher with the National Institute on Aging. She spent her days in the laboratory, studying how our cells repair DNA. But on her drive home she saw the effects of poverty and racial discrimination in the city; the average life expectancy for Baltimore residents was more than 10 years lower than for the surrounding counties.

"I became concerned that my studies on MCF-7 cells and DNA repair were not really going to get to the bottom of what I saw every day," said Dr. Evans. This sparked the idea to follow a range of Baltimore residents as they aged, leading to the Healthy Aging in Neighborhoods of Diversity across the Life Span (HANDLS) study.

"I consider myself a poster child for NIMHD and health disparities here at NIH," said Dr. Evans explaining how funding from NIMHD in the 90s allowed her to change the direction of her lab and start up the study, which continues today. "I just kept coming back for more funding."

Testing strategies and building the evidence-base

Around that same time on the other side of the country, Dr. Spero Manson sought to address the high rates of suicide in Alaska Native communities. Stigma around mental illness prevents many people from getting help, something Dr. Manson knows well from his work and experiences as an American Indian (Pembina Chippewa).

But what if doctors didn’t wait for people to reach out for help? With support from NIMHD, then a Center, Dr. Manson tested having primary care doctors ask each patient a series of questions. Those deemed at risk of suicide would immediately meet with a specially trained doctor who would refer them to mental health services. In the first few years, the clinic screened 18,000 Alaska Native patients; nearly 40% were at serious risk of suicide.

The strategy translated to not just lives saved, but health care dollars saved, and the data helped convince the state of Alaska to support the program through Medicaid. It has now expanded to 36 clinics across Alaska.

Looking at policies for health equity

Some health problems are so big they may be better addressed by national policies rather than strategies aimed at individuals. This is the focus of Dr. Fang Fang Zhang’s research. Using mathematical models, she estimated that about 5 percent of cancers in the United States can be attributed to a poor diet. This translates to many deaths that could be prevented.

Dr. Zhang looked at possible policies that could make a difference: putting a 10% tax on processed meats or requiring a warning label. She found that either policy could prevent around 70,000 cancer deaths over someone’s lifetime. And both would save money in the long run.

But not all health disparities are so straightforward to address. In many cases, investigators are still working to identify and understand what leads to a disparity—and the answer is often complex.

Take the sobering fact that in New York City, Black women are eight to 12 times more likely than White women to die from complications of pregnancy.

"Maternal mortality is now a crisis in this country," Dr. Elizabeth Howell said, speaking on the afternoon panel about her research into this disparity.

One reason she found: certain hospitals in New York City have much higher rates of pregnancy complications than others. And Black and Latina women are more likely to go to these high-risk hospitals. Dr. Howell’s team is now working to understand how hospitals can improve their care for pregnant women.

"We're trying to share these results and come up with some best practices to move the needle," said Dr. Howell.

Looking to the future

Sometimes we don’t know what we don’t know. For a long time, people of color have not been represented equally in genetics studies. This seems to be case for the related and newer field of epigenomics, which looks at tiny tags on our DNA that turn our genes on and off. So far studies have either focused on people of European ancestry (Whites) or have not reported the race or ethnicity of their study participants. This means the results may not apply to other populations.

"Into this fray, stepped NIMHD," said Dr. Colter Mitchell. Back in 2016, NIMHD funded Dr. Mitchell and others as part of the NIH's first social epigenomics program. Social epigenomics looks at how your environment-things like stress, discrimination, and nutrition-affect your DNA tags.

Three years later, Dr. Mitchell has amassed the largest epigenomic dataset in the world collected from children of diverse backgrounds. This data will help us understand how our life experiences shape the effects of our DNA.

In his closing remarks, Dr. Pérez-Stable said the Symposium reinforced how race and ethnicity and socioeconomic status affects health. “It’s not ancestry, it’s not biology, it’s a confluence of a variety of factors that includes context and history and behavior and environment,” he said. Through strategies that span from the individual level to national policies, Dr. Pérez-Stable hopes that one day this social construct will no longer affect the kind of health Americans enjoy.

Learn more about NIMHD’s role in the All of Us Research Program.